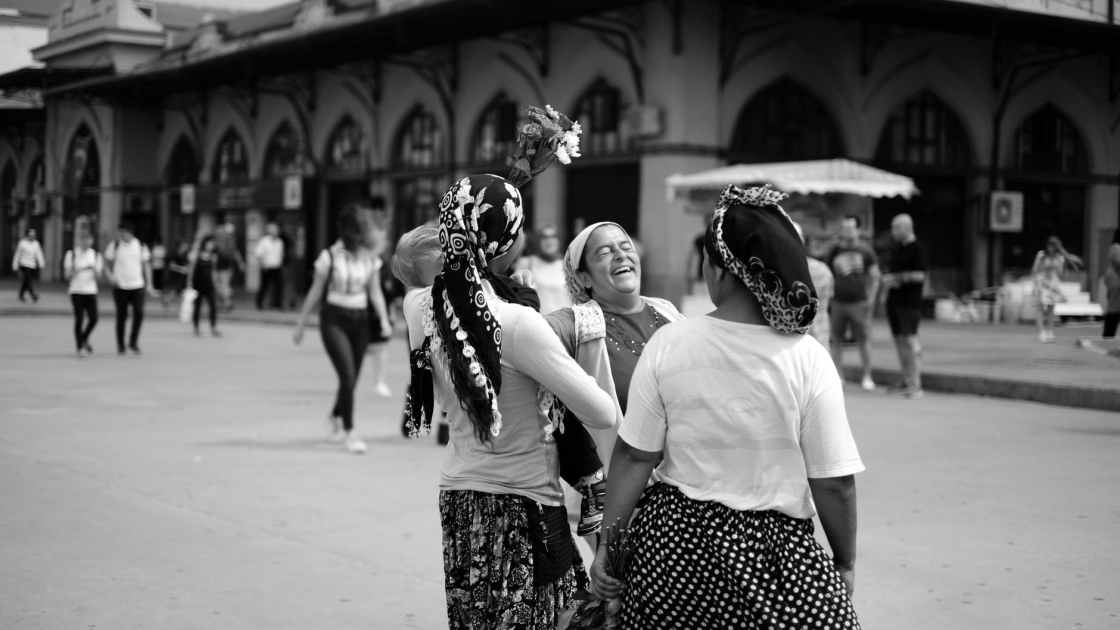 Jesus, me and the Gypsies

Do you remember that Disney movie The Hunchback of Notre Dame? It was about the community rejection of the deformed Quasimodo. Just like any Disney movie, there were other characters, handsome good guys, ugly bad guys and of course, a pretty girl. In this Disney film, there was a girl, but she wasn’t a princess. She was a gypsy named Esmerelda.

I hadn’t thought about Esmerelda in years, maybe in over a decade! But just last weekend I had an experience with a couple of women who may have been real life Esmereldas.

We were eating with some friends at Chipotle after church as one does. After all the extra guac had been consumed, we were sitting around chatting. Everything up to that point was normal.

As we sat talking though, I saw that to my friends right there were two women standing outside under a small tree. They had only been standing there for a little while when I noticed them. There were also other people passing in front of us, coming and going throughout the restaurant, so I wasn’t paying too much attention.

I glanced over every so often the way you do when there are people standing by you or walking around you in a restaurant. I still wasn’t really paying close attention because I thought perhaps they may be waiting for a ride or just two women talking outside. It wasn’t until I saw one of the women sit down on the curb that I noticed what she had.

In her arms was a crying, little baby. And when I say little, I mean little baby. The other woman who was standing next to her also had a very young baby who was not even a year old. As the woman on the ground starting nursing her crying baby, I heard that still, small Voice.

I starting just looking at them, taking in the situation and I realized that these women looked like they were looking for something to eat. I know as a nursing mom, I was constantly hungry. In that moment, I felt their plight.

Let me just say this. I think there is a lot of stigma in the church today about the homeless, vagrants and vagabonds that roam around our country. There is a lot of debate on whether or not these people should be helped.

When I volunteered to feed the homeless here in San Antonio, I have made it a point to strike up a conversation with those I was serving. In doing so, I have talked with all kinds of people. I would ask questions like, “Where are you from originally? What brought you here? How long have you been on the streets?”

I ask these questions in hopes that they would open up enough for me to share the Gospel with them. In all the conversations that I have had, I can tell you that I have gotten all kinds of different answers.

Yes, a lot of people are on the street due to drug and alcohol abuse. But some are where they are because of job loss, divorce, or bankruptcy. Some people I have talked to want to be homeless because they are devoid of responsibility, taxes and working. But there are even more that I have met that desperately want a better life for themselves but they feel they are in such a deep pit that they see no way out. Many are families with children.

Many years ago, when I was a young adult, I really had to make it a matter of prayer. Do I give money to someone who says that they are in need just to have my money go to buy beer or drugs? The answer that the Lord gave me was this, “Whether they buy worthwhile things or not is not your concern. It’s mine. You do what you know is right.” He said it another way in James 4:17.

For whoever knows the right thing to do and fails to do it. to him it is sin.

Interestingly enough, God has never asked me to first judge someone’s motives and then, if I deem them to be upright and truthful, to then help them. It’s just simply my job to do whatever it is that He is asking me to do. Period.

So, I got up from the table and I went outside.

I approached the women and to look less threatening, I sat down on the hot curb next to the lady closest to me. I asked her if she was okay and if they were hungry. She said in her very broken English, “Yes, we are very hungry.” The other woman spoke up and told me that she had other family as well. It was hard for me to understand her English, but I did hear her say something about a little boy.

When I told them that I would like to buy them something to eat, one of the women asked if they could come inside with me. I live in Texas and the summers here are no joke. It was about 95 degrees outside. I got a good look at these two precious babies that were out in the heat.. The older one looked to be about six months old. The smallest one was said to be two months, but he looked like a newborn to me. I have had three kids so I know that newborn look. That baby looked like he was about 1- 2 weeks old. So it was no question they were coming inside to order.

We went inside and I stood behind them as they ordered. After I was done paying I helped them carry their food to a table where they could set it down to get their drinks.

They thanked me and I took the opportunity to tell them, “I bought this food for you because Jesus loves you. You have beautiful babies. Be careful.’

I have to tell you that I fought off two different thoughts while helping these women. First, it wasn’t until I was in line to pay that I started worrying about what people would think. We were there with people from church and I didn’t want anyone in our party to think that I was helping just to show off or look pious.

Then afterwards, in the parking lot I was told that these women were probably Gypsies and that there were some other older women who looked like they were with those two younger moms that I helped.

It didn’t bother me at first that there were other older women. I figured that perhaps the younger women with babies were sent out to try to get food for a bigger group. It’s got to be easier for two young moms with young babies to get food from strangers verses two older women.

I saw it as a strategic survival tactic. If I were in that position, that would probably be my same plan.

But then, I started to second guess myself. I wondered if I made a bad decision based on maternal instinct. Had I fallen into their scheme? Did they have money to buy sandwich stuff but just wanted to get some free Chipotle? Was I not being wise with the hard earned money that we had. We certainly could have used that money for something else.

Fast forward to the start of the new week. I took on the task of doing a whole week of VBS at home with my kids. hahahahahaha help me. It was uh, tiring, but they had a lot of fun and hopefully grew closer to the Lord so it was worth all the time and effort. But again, tiring. Send coffee.

As it happens, right in the middle of my week, in the middle of my day, in the middle of a VBS video, God interrupted in the most wonderful way as He tends to do. I love when He surprises me out of nowhere. It’s like He busts the door open with a package that I forgot I ordered. There God was standing right in front of me with an answer to a prayer I had tucked back into the corner of my mind. I had forgotten about my anxious thoughts, but He hadn’t. He never does.

Each day, the VBS “Kid Vids” highlight a child in other part of the world. This particular day, my heart raced as the narrator began to introduce a little girl who lives in Romania by the name of Roxanna. I wasn’t surprised because she was one of six girls. (yikes!) I was surprised when I heard the narrator say that she and her family are… you probably guessed it, gypsies.

As soon as I heard that, I got a lump in my throat because I knew in that very moment that God was responding to my anxious thoughts about what happened just a few days beforehand. Not only did He answer the questions that I had. I learned a lot that I did not know.

Eight year old Roxanna and her family of eight, live in a community village outside of town. The reason and she and other gypsy families live outside of town is because in Romania, Gypsies are treated very poorly. It is hard for her dad to find a job. Many business owners won’t hire him because of his heritage. Roxanna and her sisters are not even allowed to go to school with everyone else because they are Gypsies.

As the video closed out, I felt the Lord speaking to me, “These gypsy people are mistreated and outcast even in their own country. They came here to find equality and a better life, but instead they find that they are still outcasts. Instead, let them come to America to be welcomed and find that they are loved. Let them find MY great love for them.”

I want to remind you to be someone who doesn’t move to act based on reason and proof. Be someone who moves to action based on what we know God would want us to do.

I write this as a warning to not do what I did and second guess the opportunity to serve someone in Jesus’ name. Don’t worry like I did about the cost. The $40 extra dollars I spent pales in comparison to what God has spent on me and what He has spent on you.

He spent all of heaven for us.

I know now for certain that God put me there to meet those women. It was a divine assignment. My prayer this week has been that they would find someone else along their path who would share more with them about the love that God has for them.

And my prayer for you is that you would look for opportunities to love on others the way that God loves you. That you wouldn’t talk yourself out of serving someone and that you wouldn’t care about the cost. Give of your time, give of your money. Give of whatever it is that you have. Do we not have a Father who can give us more to provide for our needs and for the needs of those around us? The answer is yes. We do. Listen to the Lord. Follow His commands and let Him use you.

I want to leave you with this song that Esmerelda the gypsy sang in the church where she took refuge. It’s called “God Help the Outcasts”